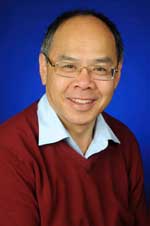 Born and bred in Palmerston North, it was natural that Stephen should attend the university there. At Massey University he did a BSc(Hons) degree in statistics followed by a MSc in mathematics. While a student at Massey he developed an interest in numerical analysis. This interest led him to obtain a Commonwealth Scholarship which enabled him to do a PhD at the University of New South Wales (UNSW) in Sydney. His PhD research topic was on the numerical solution of integral equations (these are equations in which the unknown function occurs as part of an integral).

In 2011, he was a recipient of an award for Administrative Excellence and also received the 2011 Vice-Chancellor's Medal for Staff Excellence.

His interest in numerical analysis continues to this day. His current research is on lattice methods for the numerical evaluation of integrals in many variables.