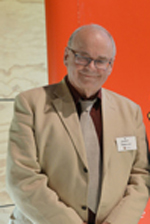 Dr Murray Jorgensen was awarded the title of Honorary Fellow for his contribution to the field of statistics after being on the staff for 27 years, from 1986 until 2013. He retired as a full-time senior lecturer in July 2010, going on to hold a fixed-term part-time position in the Department of Statistics until July 2013.

From 1986 until 1994 he was the Statistics section leader in the Department of Mathematics and Statistics. During this time he instituted changes in the course structure for Statistics, worked for the growth of Statistics within the University including support for the establishment of Waikato Centre for Applied Statistics, and developed the Statistics stream for the BCMS degree. He was the Chairperson of the Statistics Department from 2008 and 2009 and the Statistical consultant in the WAND group, a position Dr Jorgensen held until he retired.

Dr Jorgensen was a member of the Royal Society of New Zealand National Committee of Mathematics from 1984-1990.