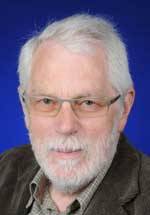 I studied Electrical Engineering at the University of Auckland, and then went on to complete a PhD on digital data processing in radio astronomy. Following a post-doctoral research appointment at Imperial College in London, which involved the development of an interactive graphics CAD system for electronic circuits, I returned to New Zealand to take up a lectureship in computer science at the University of Waikato in 1975.

In 1985, I moved on to a chair in Computer Science at Massey University, where I was also Head of Department, and from 1992-94, Dean of the School of Mathematical and Information Sciences. In 1994, I returned to the University of Waikato as Professor of Computer Science, and took up the position of Chairperson of the Department.

From 2003-08 I was Dean of the School of Computing and Mathematical Sciences here at Waikato, and I was PVC (Research) for the University in 2011/12. I am currently a Professor in the Software Engineering Department.

From the time of my post-doctoral work at Imperial College, the main focus of my research has been human-computer interaction. Work in this area includes the MINNIE cad system, the invention of the bifocal display, the development of the Lean Cuisine notation for the description and design of direct manipulation interfaces, techniques for the evaluation of interfaces, the study of CSCW systems, and techniques for information visualisation. In recent years I have been engaged in energy informatics research, specifically the application of ICT in renewable and efficient energy utilization and smart micro-grids