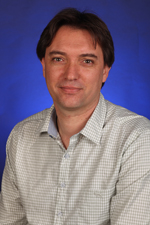 I received my Bachelors degree in Computer Science from the University of Edinburgh in 1991 (class medalist). For the following two years I worked in the area of CAD/CAM design as a research engineer for Thorn EMI (London). In 1993 I was awarded a Commonwealth scholarship to undertake a PhD at the University of Canterbury (NZ) to study the problem of optical music recognition. I joined the department at Waikato in 1996, completing my PhD part-time a year later. In 2001 I was promoted to senior lecturer, to associate professor in 2009, and have held the post of professor since 2016.

Since moving to Waikato I have continued to broaden my interest in digital media, while retaining a particular emphasis on music. I'm the Director of the Greenstone Digital Library Research Project, recepient of the Namur award in 2004 for its IT development for humanitarian aid. Through this work I have collaborated with several United Nations Agencies, the BBC and various national and regional libraries. Our digital music library system, Meldex illustrates some the ideas we are exploring in musical domain, including the ability to retrieve songs by humming part of the tune. Other media I have experimented within a digital library context include oral history, historic primary source documents, and video content.  I have published in the areas of image processing, music information retrieval, digital libraries, human computer interactions, spatial hypermedia, digital humanities, data compression, and text mining.