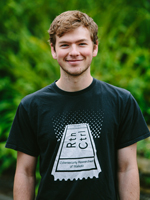 Anyone who downloads the latest version of the Gallagher Command Centre Mobile App, created to make it easier for customers to manage security control, will notice a few new features.

The most impressive is that it’s programmed to work Gallagher’s innovative Mobile Reader – a seemingly simple piece of hardware that looks like your average phone case, yet is at the forefront of agri-technology in New Zealand. The reader allows customers to scan all Gallagher encoded Mifare cards to simplify ID verification for cardholders.

And it was developed and tested by one of Waikato’s Bachelor of Computing and Mathematical Sciences (BCMS) graduates.

Sjoerd was tasked with creating mobile application prototypes to test different mobile readers that were already on the market. This way Gallagher could decide if the reader was something they wanted to incorporate into their own product line, which it was.

The success of the internship led to Sjoerd being offered further work at the company, where he is now a Junior Software Engineer in the Mobile Development Team. He is also about to complete his Master of Cyber Security (MCS).

Sjoerd is just one our graduates who is mastering the digital world. You could too with a computer science degree from Waikato.